ILGA-Europe’s annual Rainbow Europe Map and Index, which ranks the legal and policy situation of LGBTQ+ people in 49 European countries, finds that over the past 12 months LGBTQ+ rights have come to a standstill.

However, with upcoming legislative proposals and action plans in some countries, governments now have an opportunity to recreate the image of the Rainbow Map for 2022.

ILGA-Europe is an independent, international non-governmental umbrella organisation, which brings together over 600 organisations from 54 European and Central Asian countries. ILGA-Europe’s annual Rainbow Europe Map and Index has been released every year since 2009 on International Day Against Homophobia, Transphobia, Biphobia and Intersexphobia (IDAHOBIT), ranking all 49 European countries on a scale between 0% (gross violations of human rights, discrimination) and 100% (respect of human rights, full equality).

This year’s Rainbow Europe Map and Index – published on Monday, May 17, 2021 – revealed that over the past 12 months there have been minimal advances in LGBTQ+ rights.

Malta occupies the number one spot on the Rainbow Europe Map for the sixth consecutive year, following Belgium, which takes second place for the fourth time, and then Luxembourg taking third for the third year.

Despite clear commitments on rainbow family recognition, not one country has moved forward on partnership or parenthood recognition. After reporting positive changes in bodily integrity or legal gender recognition for many years, there have been no changes this year for intersex and trans rights across all countries indexed apart from Iceland.

The map shows that the preexisting procedures, for example on legal gender recognition are worsening in Northern Ireland, as well as in Georgia, Spain, and Serbia.

On the stagnation of European LGBTQ+ legislation and policy, Executive Director of ILGA-Europe, Evelyne Paradis says:

“It is deeply worrying to report an almost complete standstill on LGBTI rights and equality, especially at such a critical time for LGBTI communities. In the past year, we have seen increased political repression against LGBTI people, a stark rise in socio-economic hardship, and the spreading of LGBTI-phobic hatred on the streets and online across the region.

“Against this backdrop, the response from governments must be more and better concrete action, to make sure people are more protected, not less. The human rights of LGBTI people simply cannot be something that you drop when circumstances are challenging. 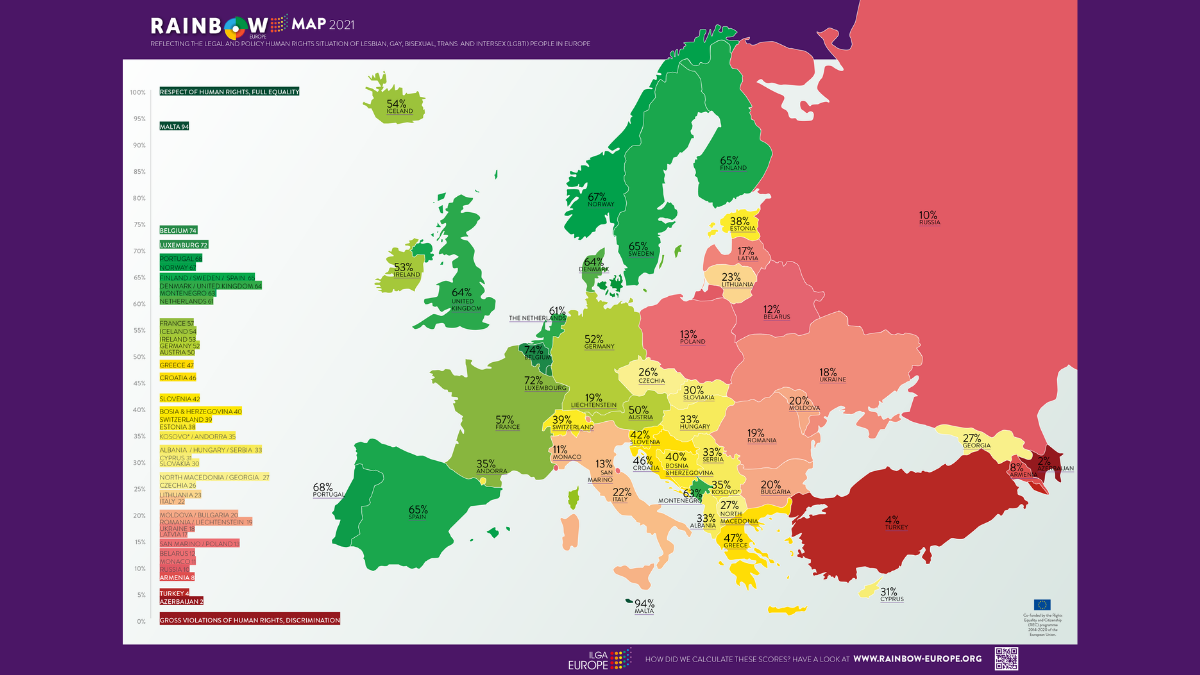